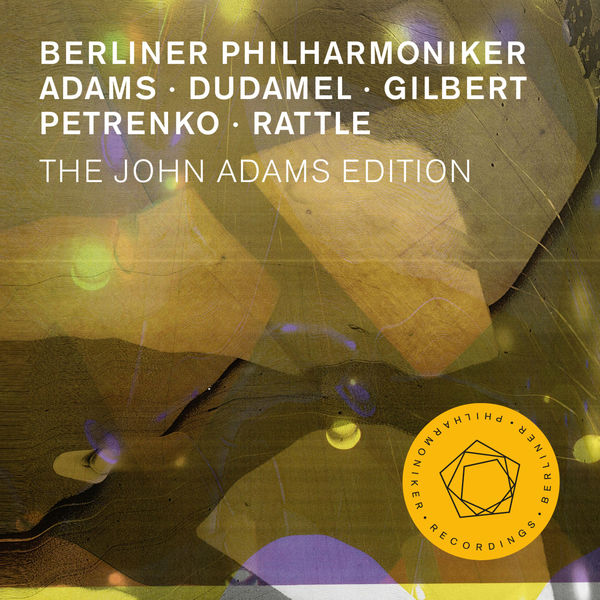 Issued to celebrate John Adams’ 70th birthday, this handsomely curated set hails from performances given in 2016/2017 when Adams was Composer in Residence at the Berlin Philharmonic. Few of these recordings supplant their originals – Adams has been fortunate in first interpreters and came to maturity in a golden age of engineering – but that isn’t really the point. This is as good a retrospective as you are likely to hear, supplemented by first class essays by the likes of Alex Ross plus revealing video interview and performance footage, frustratingly for some only included on Blu-ray.

Disc 1 begins with a beautifully crafted account of Adams’ seminal 1985 masterpiece Harmonielehre. More nimble, though paradoxically slower than say Edo de Waart on Nonesuch, listen to how Adams himself shapes the work and how beautifully the romantic Berlin strings dig down deep into the textures. Gustavo Dudamel gave the premiere of the jazz-inflected City Noir in 2009 and although his reading here has less swing and attention to orchestral detail than David Robertson’s classy account with the St Louis Symphony, the LA maestro is no slouch and the Berliners are pretty peerless. The ‘Fast Machine’ they provide for Alan Gilbert’s ‘Short Ride’ is a Rolls Royce.

Disc 2 kicks off with Lollapalooza, a 40th birthday present for long-time Adams supporter Simon Rattle, but here given a joyous reading by Alan Gilbert. “The term lollapalooza,” writes Adams, “suggests something large, outlandish, oversized, not unduly refined.” And that’s precisely how it sounds. Although they share the same soloist – the admirable Leila Josefowicz – Adams’ own reading of his violin concerto Scheherazade.2 is more filigree, a little less thrusting than Robertson on Nonesuch. Adams benefits too from the glorious BPO sound and a wider dynamic range lending clarity to the instrumentation and a sense of live occasion.

The only misstep on the set is the performance of The Wound Dresser. Kirill Petrenko has the measure of this searching work but Georg Nigl’s fluttery tone and German accent makes it hard to catch the English text.

Discs 3 and 4 are devoted to The Gospel According To The Other Mary, a modern day retelling of the passion of Jesus. The work premiered under Dudamel in 2012 and was well recorded by Deutsche Grammophon but here Simon Rattle’s interpretation wins the bays bringing out the subtlety of Adams’ colours and a deeper sense of dramatic ebb and flow. A fine cast is led by Kelley O’Connor as Mary and Peter Hoare as Lazarus, whose flesh-creeping resurrection will raise the
hairs on your arms.