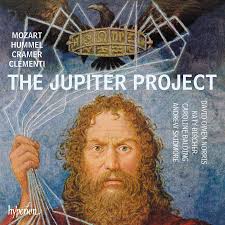 Downsizing big works of the great composers became a cottage industry in early 19th-century London, led by the Italian-born composer, pianist and piano-maker Muzio Clementi and publisher Johann Baptist Cramer. They would take whole symphonies, concertos and even operas and arrange them for small, easily portable ensembles so they could be played in salons and reach audiences out in the provinces.

For many this was their first taste of Haydn, Mozart and the young Beethoven, and notable among these pocket-sized masterpieces was Clementi’s 1822 arrangement for piano, flute, violin and cello of Mozart’s Symphony No 41, published with the nickname “Jupiter” for the first time.

British pianist, broadcaster and educator David Owen Norris has used it as a starting point for an entertaining and fascinating disc featuring his “Jupiter” ensemble of flautist Katy Bircher, violinist Caroline Balding and cellist Andrew Skidmore.

Cramer produced two arrangements of Mozart’s Piano Concerto No 21 – one for London in 1827 and the other for Munich in 1836, both played in full here – and
Johann Nepomuk Hummel, a former student of Mozart and friend of Beethoven, arranged several works for the same line-up, including the overtures to The Marriage of Figaro and The Magic Flute, which complete this album’s track list.

The first thing to be said is that you hear all these familiar works with new ears on this recording, particularly the symphony. Clementi, of course, knew Mozart – they famously vied in a friendly keyboard face-off organised by Austrian Emperor Joseph II – and the pupil was at pains to preserve the master’s original intentions.

Norris is superb, giving this performance all the sparkle and majesty that can be summoned from such an unlikely combination of instruments. Bircher’s flute provides a sketchy simulacrum of the woodwind section (your imagination or aural memory fills in the rest) and Balding and Skidmore manage their meagre resources skilfully. But this is Mozart after all and if at times it sounds like a 28th piano concerto it is enjoyable nevertheless. The final fugato movement fairly rattles along.

The two Cramer arrangements are both equally satisfying and are difficult to tell apart without having the scores. Hummel’s overture treatments are the perfect companions.

Beautifully produced and recorded by the Hyperion team, this is music which should give even the pickiest Mozart fan as much pleasure as it must have brought to those 19th-century punters out in the sticks.

We know Sullivan primarily for the brilliant music he wrote for the equally brilliant comic plays of WS Gilbert. Many will also know some of his excellent concert music. The songs are a different matter, although many are attractive and well written,  they fall outside the popular Lieder repertoire inhabited by Schubert and his lot, not always reaching the heights attained by those German composers with which they have a cultural affinity. Nonetheless they are certainly worthy of our attention and so Chandos has come to the rescue with 46 of them. For his texts Sullivan drew widely. He drew from Shakespeare, O Mistress Mine and The Willow Song. The song cycle The Window by Tennyson and from Robert Burns the delicately felt Mary Morrison. In the main the music is often what you would expect, lightly inspired Victoriana. For example, the Arabian Love Song, with its mysterious piano ripples between verses is intriguing and the ballad Once Again undoubtedly had female hearts fluttering in many a drawing room. Sweethearts is a melodramatic duet from the composer’s old collaborator, Gilbert. It is set as a waltz and goes with an engaging swing. Familiar to Savoyards will be the reworking of…