Family dramas played out on the theatre stage seldom probe the sometimes joyful, sometimes agonising fury of sibling rivalries. Sure, we have domestic sagas involving characters related to each other – Pinter’s The Homecoming, Wilder’s Our Town, Hansberry’s A Raisin in the Sun, any play by Chekov – yet few of them centre on the intricate, abiding connection between siblings. 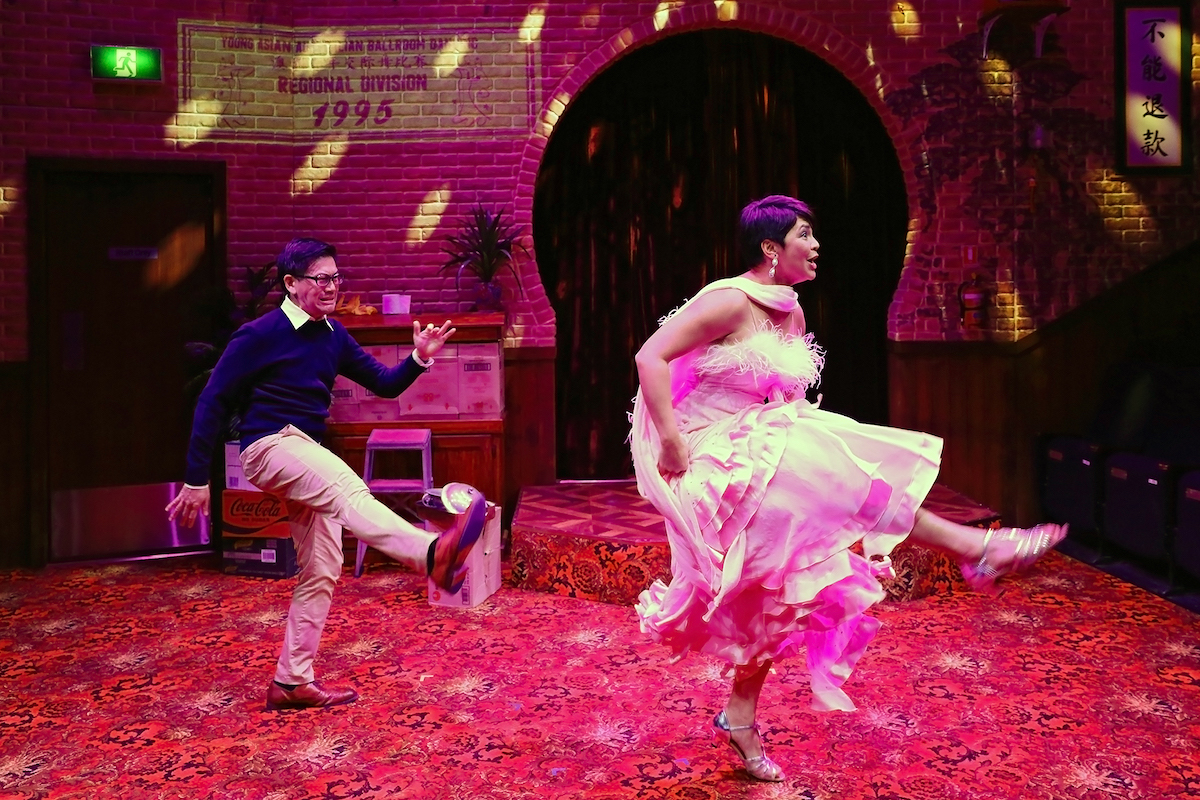 Shan-Ree Tan and Angie Diaz in The One, Ensemble Theatre, 2022. Photo © Prudence Upton

The intense bond between sisters and brothers bears ample fodder for the perfect blend of comedy and drama. That relationship is even more intimate when the siblings find shelter and comfort in their shared experiences of being ‘outsiders’. Children of migrants, for instance, often possess deeply acute emotional connections with one another – they can commiserate on the mutual experiences of being neither of the country of their new home, or of the country they left. This sense of displacement, this ‘one foot there, one foot here’ mentality is at the emotional core of Vanessa Bates’ new play, The One.

Brother/sister duo Eric and Mel are polar opposites, forced to engage with each other as they prepare a huge birthday party for their mother. Eric (Shan-Ree Tan) is a shy, introspective librarian, while older sister Mel (Angie Diaz) is a larger-than-life, exuberant former reality show contestant. But one thing they share is an unwavering devotion to their mother Helen (played by the effervescent Gabrielle Chan), who appears in the first half of the play only digitally, on Skype.

The impending arrival of the matriarch from her hometown in Penang causes both siblings private griefs: Eric is anxious about the potential mayhem of finally coming out to his mother, while Mel doesn’t want to concede to her mother’s wishes to get married to her long-term boyfriend, Cal (Damien Strouthos), a fellow contestant on the reality show.

The narrative exposition meanders somewhat in the first half. “Welcome to my dream sequence,” Eric announces, as sepia photos of his childhood with Mel are shown as slides on the walls of Jim’s Oriental Restaurant and Milk Bar.

“Mid-90s original Chinese ambience,” Eric reminds us, as the siblings forge their reconnaissance. The celebration must be perfect for their mother – after all, she is the most important person in their lives.

Most of the drama unfolds here in this restaurant – as so many plays involving Asian characters seem to be set – as if stories of Asian people can only be consumed and mediated through that palatable lens by white audiences.

Perhaps in this case though, there is useful symbolism at work; they have come together, reunited physically in a space that is the commercial manifestation of their own identities: half white, half Asian. (Eric’s and Mel’s father is Anglo-Australian). 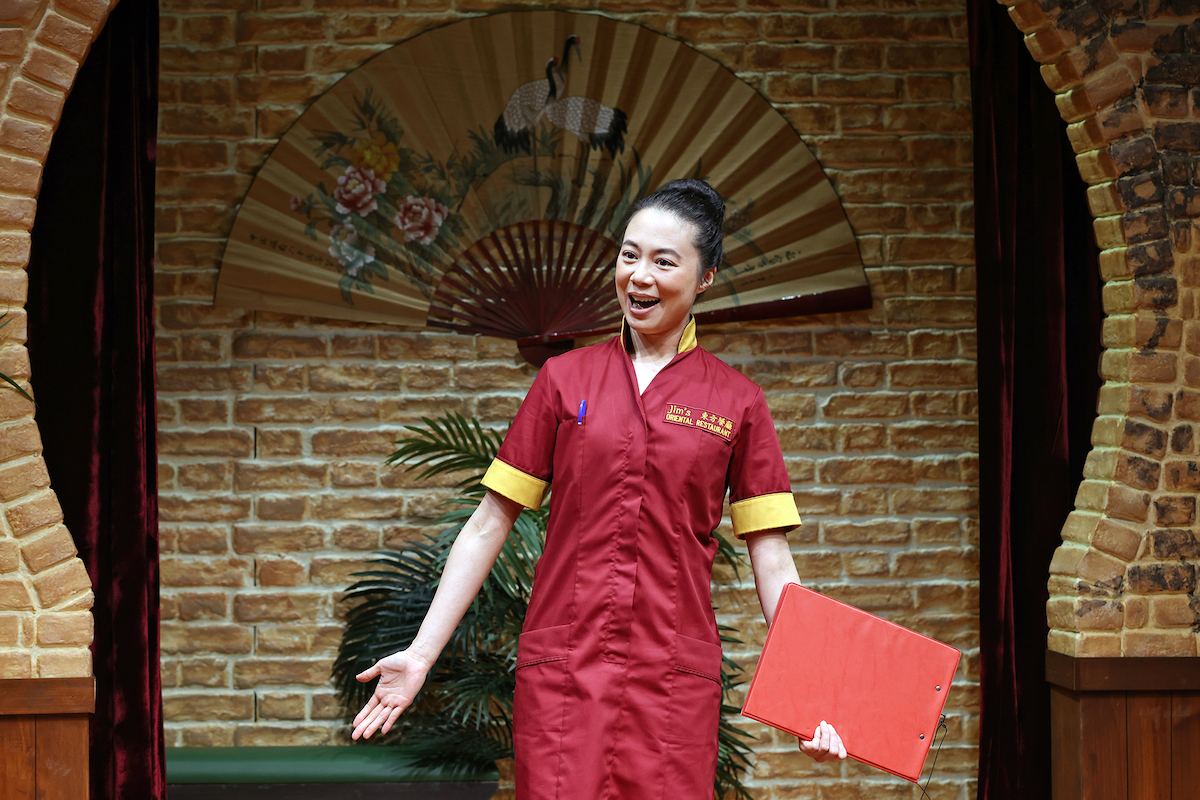 Aileen Huynh in The One, Ensemble Theatre, 2022. Photo © Prudence Upton

The minor rifts between brother and sister are enlivened by the comic addition of the head (and perhaps only) waitress of this restaurant, Jess, played by the immaculately stern and poised Aileen Huynh. Huynh carries an incredibly restrained power throughout the play; you can imagine her lifting a car above her head if the occasion required it.

She was definitely the strongest female performer; her repressed rage was utterly compelling. She played the maniacal, managerial figure rather brilliantly, channelling the character’s febrile constitution through her physical composure: stiff shoulders, erect posture, tight and deliberate movements.

The play mined the nature of a range of different relationships: between mother and daughter, brother and sister, human and dog, girlfriend and boyfriend. This last relationship, the one between Mel and Cal, was, conceptually, the least interesting, though it was the most compelling to watch. Strouthos embodied his character with convincing flair, indulging us with a few lines about the ludicrous obsession some pet-owners have towards their dogs.

The play also contained a handful of flashbacks, where the stage was drenched in red light, and one of the leads recounted an incident of racial trauma. I’m not sure those flashbacks were needed. They felt a bit ham-fisted, too intentional. Do we really need more of those ‘Here’s a list of all my worst experiences of racism I encountered’ monologues? I saw it recently too in Michelle Law’s Top Coat.

Often, it is used to make white audiences feel more sympathetic towards the ‘marginalised’ character; but it left me wondering if we need these characters to relive their trauma just so we can feel sorry for them. Must we get to know someone or understand them through those lenses alone? Surely, Asian people are not the sum of all the worst moments of their lives? We are not bodies that move around, compiling a running list of all the moments when white people have denied us our humanity. I think when we do that, we give those with power, too much power.

My life, living in an Asian body, is not simply one which is determined by all the times I’ve been ostracised by white people. Surely, I am so much more dynamic and complicated than that?

Whenever a sympathetic Asian character appears on stage, cataloguing the racial taunts they have endured, it can frame us too clearly as only a victim and nothing else; we end up reducing the complexity of our own unique humanity. I am thinking a lot about this, obviously, because when there are so few Asian people and their stories on stage, I can’t help but feel overly invested in whether or not it is being done right.

Perhaps there is no one right way; whatever attempt to give us our own stories and our humanity more space to grow can only be a good thing. Any story that affords us more space to deny the diminishment that we’ve historically been treated with must be celebrated.

One reviewer called The One an ‘issues’ play, to which I found myself wondering, isn’t every play an issues play? Some issues just impact some more than others. This play’s ‘issue’, I suspect, among others, is racial (ie. it personalises the real-world effects of racism).

It points the finger at school-aged bullies, children; though ultimately, when we blame children, we blame no one; we cannot blame children, children are immune to judgement or incrimination (because they are children).

Nick Fry’s assured set supplies the requisite foundations for these complex dynamics to play out in this world premiere production, directed by Darren Yap, while Verity Hampson’s lighting design immerses us into the tale, crucially engineering the comedic climax of the play when Jess, the impassioned waitress, blitzes our leads with a taser in a sequence which sent audiences buckled over in their seats with laughter.

Ultimately, The One is a vibrant, fun, inoffensive play that is guaranteed to make you cackle with joy.

The One plays at the Ensemble Theatre, Kirribilli, Sydney until 27 August.