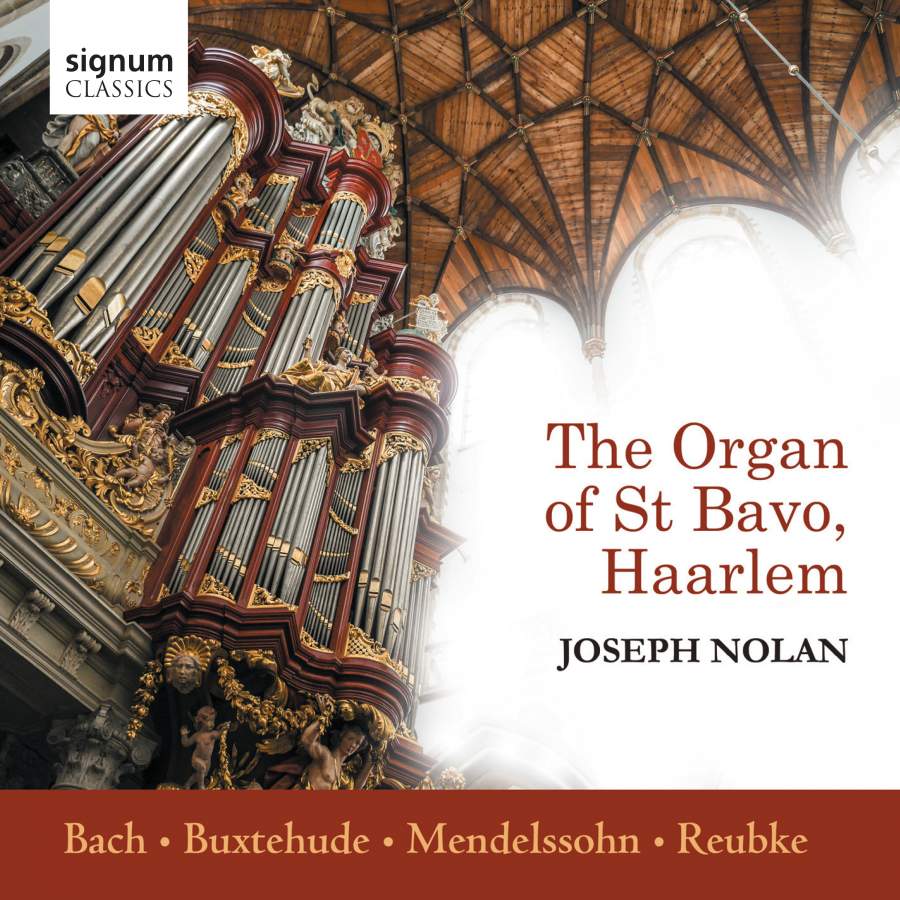 Poor Julius Reubke. A talented pianist, organist and composer, Hans von Bülow thought him Berlin Conservatory’s best student. He became Liszt’s favourite when he studied with him in Weimar. In 1857 he completed his masterful B Flat Piano Sonata and C Minor Sonata on the 94th Psalm for organ. A year later he was dead at just 28. Reubke’s monolithic, monothematic, programmatic organ sonata forms the centrepiece of West Australian-based Joseph Nolan’s tenth organ recital for Signum Classics, part of a significant body of recordings including a highly-acclaimed traversal of the complete solo organ music of Widor.

Like the other works here, the Sonata on the 94th Psalm is performed on Christian Müller and Jan van Logteren’s magnificent 1738 organ of St Bavo, Haarlem. This superb three-manual instrument, played by Handel, Mozart and Mendelssohn has over 5000 pipes and 64 stops.

Nolan chooses to showcase the instrument’s magnificent sonority and capacity for innumerable colour combinations by opening his recital with Henri Messerer’s arrangement of JS Bach’s Chaconne from the D Minor Partita for solo violin. It’s one hell of a curtain-raiser, with Nolan imbuing each variation with, by turns, urgency, poignancy, terror and gentleness, never losing momentum. As minor switches to major, the storm abates and sunshine floods the sound. It’s temporary, but the effect is stunning.

Sunlit in its entirety is Buxtehude’s F Major Toccata and Fugue, which Nolan despatches with a cheerful virtuosity before leading us into the more dappled light of Bach’s Nun Komm, der Heiden Heiland – gentle – and Trio Jesus Christus Unser Heiland – slightly agitated.

These last three works feel like stops – no pun intended – along the way between the forbidding edifice of the Chaconne and Mendelssohn’s perhaps finest work for organ, his Sonata in D Minor, its submerged passion brought to the surface by Nolan with as much elegance as élan. Mendelssohn’s relative conservatism serves as an ideal introduction to, and foil for, Reubke’s more disturbing soundworld, which takes Psalm 94 – “O Lord God, to whom vengeance belongeth” – as its program.

It’s as though Caspar David Friedrich’s wanderer actually leaps from the precipice into the unknown. Influenced by Liszt’s compositional and harmonic innovations, Reubke paints such shuddering visions of trepidation and triumph that only organists of Nolan’s stature can do them justice. What music. And what a performance.