The Sleeping Beauty is rather odd in the canon of classical ballet. Princess Aurora doesn’t appear until after the extensive Prologue and her saviour Prince Desire not until Act 11. But there’s plenty going on to introduce this childhood story about a princess who is cursed and poisoned and must slumber until her true love awakens her with a kiss.

Princess Aurora and Prince Desiré with the dancers of West Australian Ballet in The Sleeping Beauty. Photo © Bradbury Photography

The costumes (Erika Turunen) are works of art, in gorgeous soft hues and soft fabrics for friends and fairies and stunning blood red and black for the wicked witch Carabosse who’s accompanied by a group of stunning bats. The tutus sparkle with jewels and the guests stand resplendent in luxuriant hooped-hipped dresses, and vast curly wigs.

The sets (Minna Wallenius) are lush and grand depicting ornate palace interiors, woodland glades, and the most beautiful, cave-like vista where Prince Desire is enticed by the powerful Lilac Fairy into Aurora’s dream as she sleeps her hundred-year sleep. Nigel Levings’ ambient lighting focuses on a glistening waterfall. Together with the enfolding scrim and the misty floor it’s magical.

Choreographer Marius Petipa had the brilliant idea of asking Pyotr Ilyich Tchaikovsky to collaborate in creating The Sleeping Beauty thereby creating an exquisite blend of motion and mellifluousness. It was first performed in 1890 and, like a magnet, has encouraged adaptations ever since, not least by Rudolph Nureyev whose Kirov master apparently thought it was the ballet of all ballets. Now, Javier Torres has shortened it and expanded parts for The West Australian Ballet – adapting it from the one he created for The Finnish Ballet.

The West Australian Philharmonic Orchestra under conductor Jessica Gethin played exquisitely, teasing out the explicit leitmotifs so that you could, as Torres suggested, have closed your eyes and know who or what was coming.

Torres’ version suits the company perfectly, exacting the utmost control and precision – the kind that has your heart in your mouth as the dancers set up to execute some truly difficult display of technical bravura. Most famous is the Rose Adage where Aurora (Chihiro Nomura) must stand en pointe, balance alone as each suitor turns her in a circle by one hand and lets go of it. Nomura did it with aplomb and will no doubt extend the lift of her hand as the season unfolds. She was exquisite as the 16 year old – giddy with the excitement of being required to choose a husband. She brought the house down. 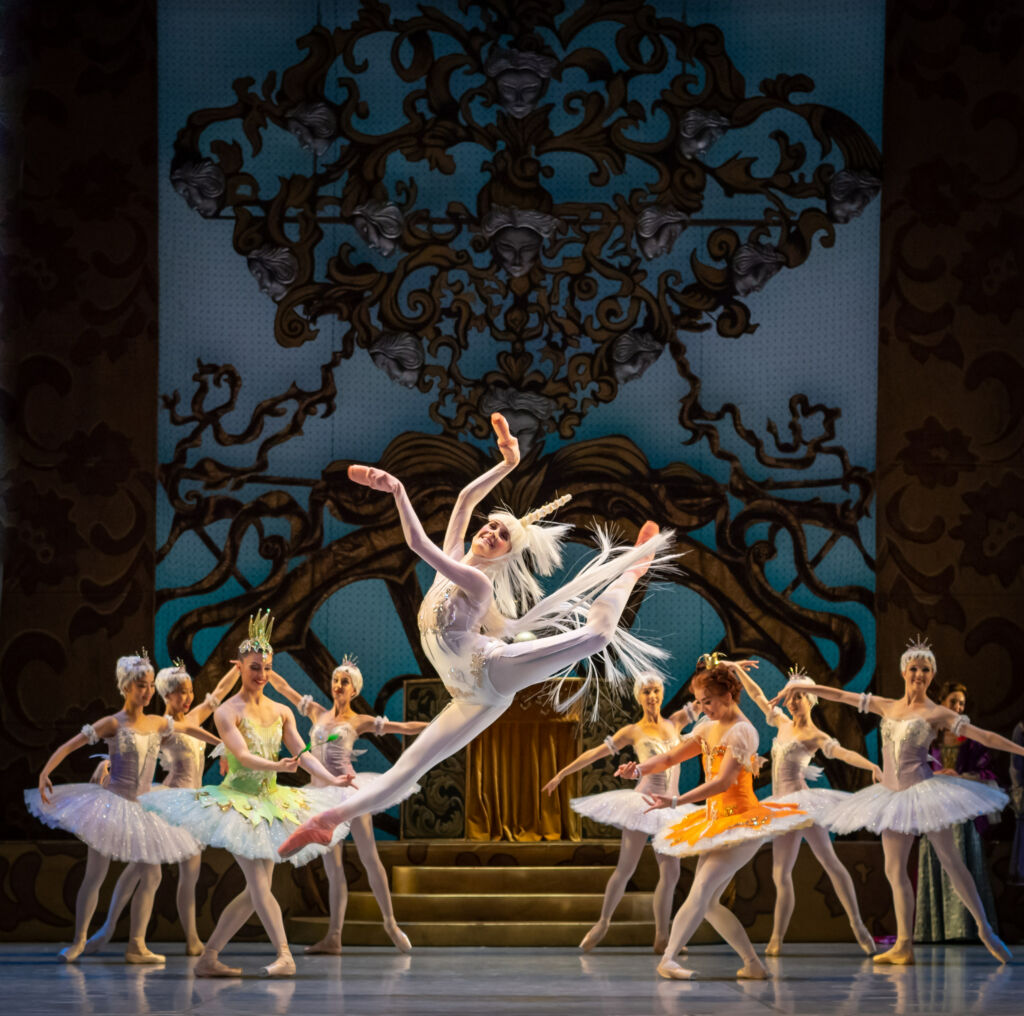 Kassidy Thompson as the Unicorn with the dancers of West Australian Ballet in The Sleeping Beauty. Photo by Bradbury Photography.jpg

Also creating an avalanche of applause was an outstanding performance by Oscar Valdes as Prince Desire. Amidst a herd of deer dressed in the cutest silvery attire, he struts around in magnificent cocky self-assuredness and lunges into muscled-bound leaps to shoot the Golden Deer (Julio Blanes). His duets with Nomura were compelling in ardour although a little more sensuality on Nomura’s part would have added manna.

The Lilac Fairy (Alexa Tuzil) was enthralling, gliding en pointe, disarmingly graceful and radiant. The various acts during the wedding sequence exposed many talents of which Carina Roberts (White Cat) Oliver Edwardson (Street cat) and Ruben Flynn-Kann (Puss in Boots) exemplified the humour that the company does so well.

Several curtain calls and endless clapping was testament to the lure of the melancholy sweetness of this favourite fairy-story and the appreciation of the top-notch talents of this thrilling company.

The Sleeping Beauty is at His Majesty’s Theatre, Perth, until 12 December, 2021.

Jessica Gethin, Emmalena Huning and WASO ensure the audience leaves the concert hall with a smile.

WASO gives such an effective performance of Carl Orff's famous cantata that it is revealed in a fresh light.