Melbourne is blessed with many big, sensorially stimulating shows at the moment, from Opera Australia’s two just-concluded productions to the new Cinderella and ‘reimagined’ Harry Potter. Melbourne Theatre Company’s latest is extraordinarily stark in comparison. A 90-minute literary two-hander with a minimal set, The Sound Inside reminds us how theatre can move, intrigue and disturb with little more than words. How a subtle change in the way a gifted actor speaks, looks or moves can create a seismic shift in what the audience thinks or feels. This is theatre for the mind rather than the senses. 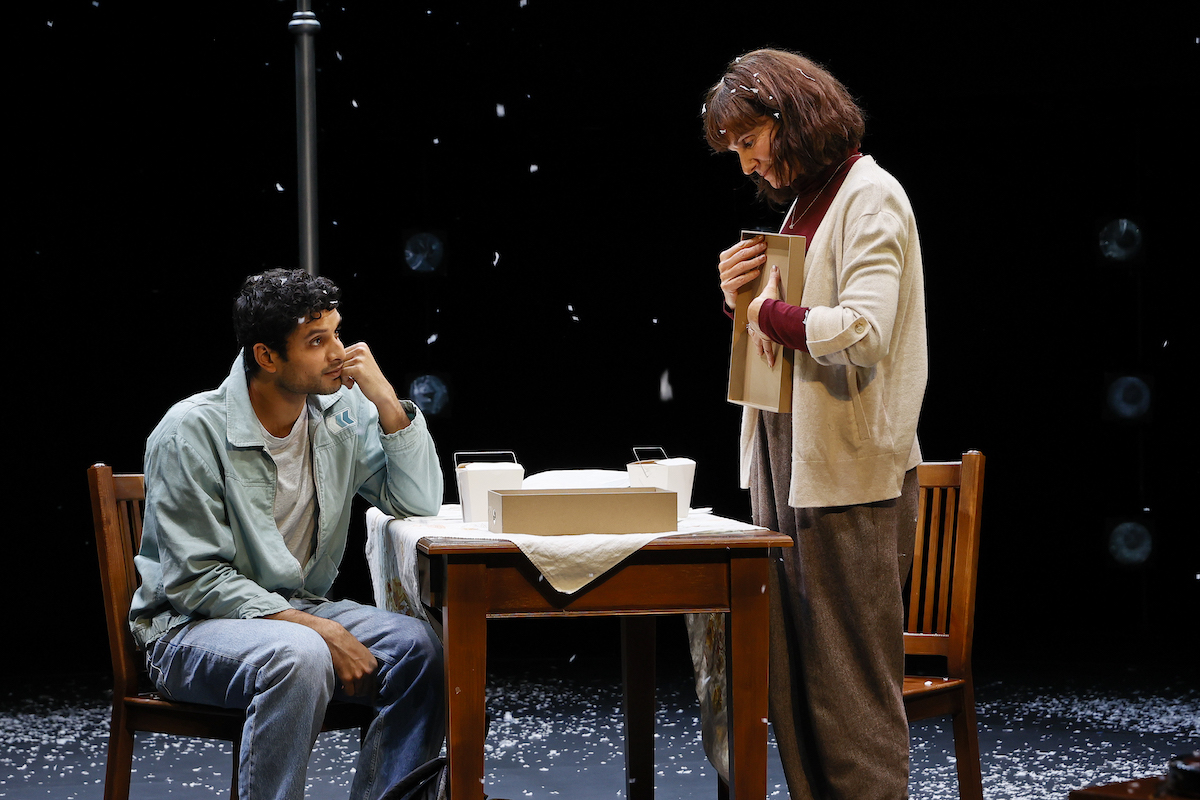 The latest from New York playwright, novelist and TV writer Adam Rapp, The Sound Inside was nominated for six Tony awards in 2020, including best play. It explores a brief period in the life of Bella, a middle-aged Yale professor of creative writing. A cancer diagnosis seems to signal the impending end of her small, bookish life when one of her students, Christopher, starts dropping by her office. This fellow misfit is initially abrasive, but they quickly bond over a shared love of books and writing (aficionados of American literature will relish their discussion and quotes). In this novella-like play, in which Bella in particular slips into third-person narration, and she and Christopher often speak as if they are writing about themselves, their fiction, lives and memories begin to overlap and merge.

This Australian premiere production directed by Sarah Goodes nurtures The Sound Inside’s intimacy and intrigue, letting the words sear and simmer in our minds. Catherine McClements’ Bella considers everything, even her own mortality, with an academic’s dispassionate, intellectual curiosity, though how she feels about Christopher is as enigmatic as the young man himself. It’s a wonderfully subtle, almost self-effacing performance, with hints of vulnerability beneath Bella’s detachment.

Beside this gifted veteran, newcomer Shiv Palekar more than holds his own. Already twice nominated for Sydney Theatre Awards, including for his role in Belvoir’s recent critical and popular success Counting and Cracking, he makes an essentially inscrutable character one we are fascinated by and care about. In a performance that is measured, even during Christopher’s initial anger, Palekar conveys the awkwardness and self-doubt of a life that mostly happens off-stage. The connection between the two actors is palpable.

Elizabeth Gadsby’s set gently supports rather than distracts from the words and actors. A street light is near the centre of a double revolve, which enables Bella and Christopher to repeatedly come together and move apart, like celestial bodies moving through time and space. A few simple items of furniture appear to help set scenes, and the odd prop, including a bottle of wine and two cups, is plonked down by a stagehand and revolved in and out, like detritus in space. Snow falls as autumn gives way to winter, but just as the change of seasons is a metaphor for Bella’s life, this theatrical effect is more emotional than literal, drawing on words spoken, the ideas and memories they spark, and an ending we dread.

Christopher tells Bella his mother is a prolific writer of mystery novels, but won’t reveal her name. There’s plenty more mystery about The Sound Inside, which creates a growing sense of intrigue and even anxiety. It can also be mysterious in its meaning and intent – wilfully so sometimes, like what the title actually means. Bella recounts writing the words ‘the sound inside’ over and over for 20 minutes, then concludes that she has no idea what it means. Such inscrutability, and this production’s minimalist approach, won’t be to everyone’s taste, but those looking for theatrical brain food will enjoy chewing over The Sound Inside long after the lights go out.

Melbourne Theatre Company’s The Sound Inside plays at the Fairfax Studio until 2 July.