Wesley Enoch and John Rodgers’ joyful, jazzy musical The Sunshine Club has returned to the QPAC Playhouse in Brisbane, over 20 years since its first season there in 1999. Directed again by Enoch, who wrote the book and lyrics, and including a number of creatives who worked on the original production, this revival stars a new generation of First Nations artists, the majority of whom are making their Queensland Theatre debut in this production.

The Sunshine Club was commissioned by the then-Queensland Theatre Company and developed over a three-year period, premiering in Cairns in 1999 and touring to a number of regional locations before opening at the QPAC Playhouse. 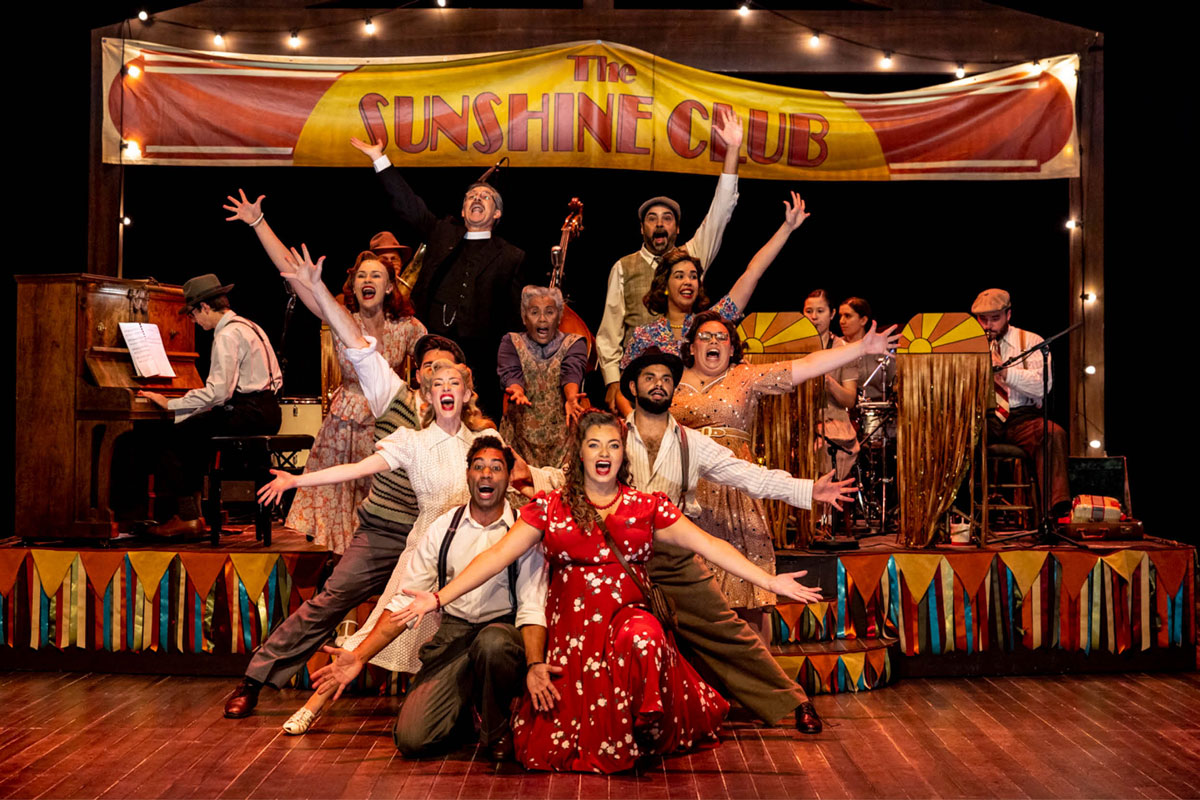 In the summer of 1946, Aboriginal serviceman Frank Doyle returns home from World War II to find that, despite his hopes, very little has changed in his home city of Brisbane; although he has spent two years fighting alongside troops from all over Australia, everything that he has suffered and sacrificed overseas has been for the freedom of others. After being denied entry to the Cloudland ballroom, Frank decides to organise his own dance hall, The Sunshine Club – a place where everyone is welcome, where anyone can come together to mingle and dance, and where Frank can dream of a future with Rose, the beautiful girl next door, and a better life for himself and everyone he loves.

The Sunshine Club is placed firmly in 1940s Queensland, with local and temporal touchpoints including the pineapple cannery, McWhirter’s department store, local language, and the relief of a good summer storm. Set in Brisbane only 80 years ago, when First Nations people were denied the right to vote, had a curfew imposed on them, and were denied access to many places, The Sunshine Club reflects on recent history and celebrates the dance halls that sprung up all over the country in this post-war era.

While the first half of the play is well-paced, establishing the characters, the club, and the potential conflicts, the second half focuses largely on the resolution of romantic relationships. The play ends in a storm of emotions, with Marcus Corowa’s gut-wrenching performance of Homecoming and the poignant ensemble finale If Not Now Then When?. A metatheatrical conclusion reframes the work and calls the audience to reflect on how far Australia has come, and how far we still have to go, on the road to Reconciliation.

In addition to its catchy songs and romantic throughlines, The Sunshine Club touches on a number of big themes – race relations in Australia are at the heart of the work, but it also considers the horrors that young men faced in the war, the forced removal of Aboriginal children from their families, the oppression and subsequent loss of cultural knowledge, and the constant threat of harassment and violence by police. Underlying the themes of racial inequality are also ideas of gender inequality – in the optimistic opening number, the women sing about having worked in factories and worn uniforms, and look forward to being afforded equal respect when the men return.

While the work does lean on some well-worn musical theatre tropes – a persistent man who wins the girl despite her repeated rejections, and pregnancy for the one character who demonstrates sexual desire and agency – the overarching story is one of love, hope and shared humanity, as well as the optimism and ambition for a better life after years of trauma and upheaval. 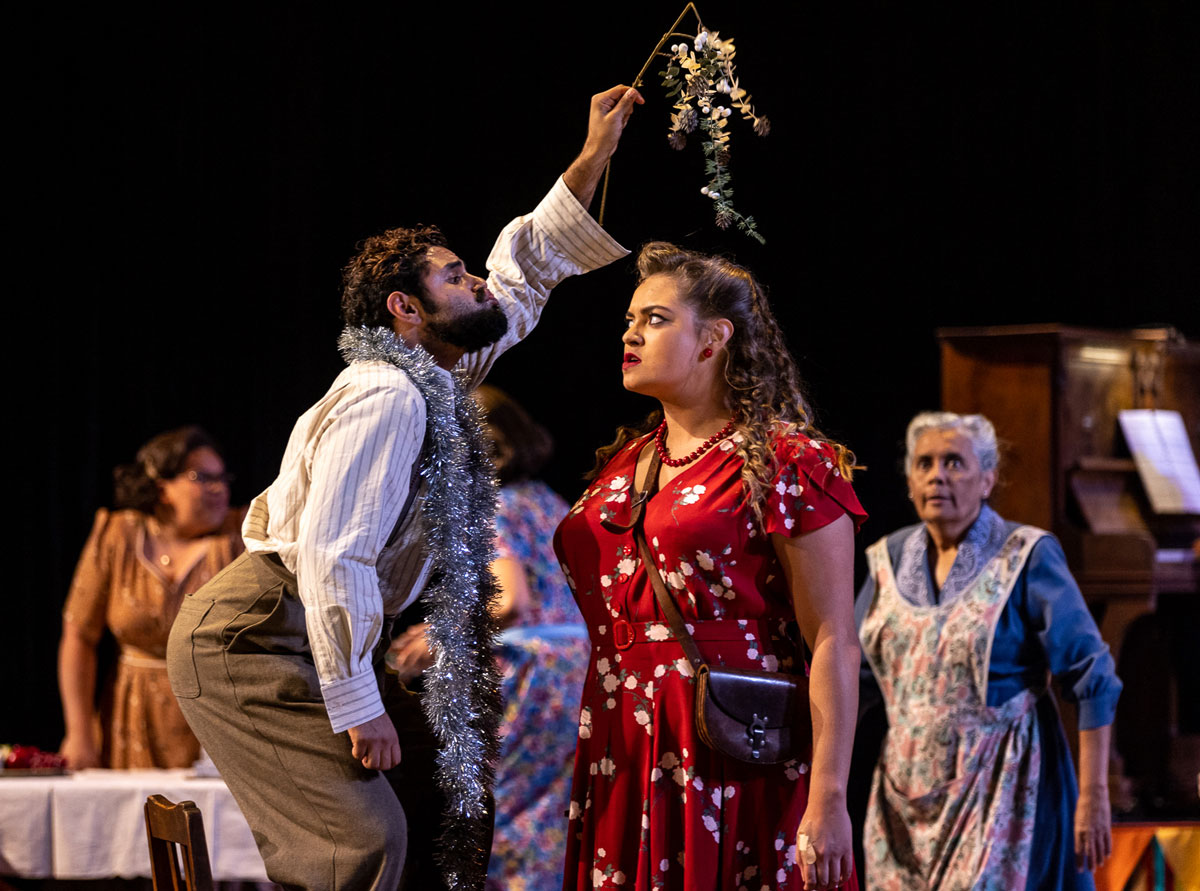 Marcus Corowa is outstanding in the role of Frank Doyle; his powerful singing voice cuts through the chorus immediately, and he brings an impressive versatility and intensity of emotion to the role. Corowa has a strong onstage presence throughout, and excellent chemistry with soprano Irena Lysiuk, who plays the role of Rose with passion and bright-eyed naivety. While the two leads are vocally impeccable, the secondary characters feel unbalanced by comparison – the ensemble creates beautiful harmonies, but Roxanne McDonald and Beau Dean Riley Smith faltered in the more challenging solo numbers or duets.

Naarah brings strength and depth of feeling to the role of Frank’s sister, Pearl Doyle, and her moving rendition of Passionfruit Vine allows her significant vocal skill to shine. Pearl is contrasted directly against Rose – both talented singers and young women dreaming of their futures, but with very different opportunities available to them, and Naarah holds this tension in her performance. Roxanne McDonald reprises her role of Aunty Faith after more than 20 years, with humour and a maternal gravitas; Beau Dean Riley Smith has excellent comedic timing as Dave Daylight; and Andrew Buchanan plays the role of Rose’s doting father, Reverend Morris.

Trent Owers gives an impressive performance as slick travelling salesman Peter Walsh, in addition to a number of ensemble roles, and the entire supporting cast – including Zoe Walters, Jazleen Latrise, Colin Smith, Kate Yaxley, and Garret Lyon – are very cohesive. There is a distinct impression that the actors are genuinely enjoying themselves, which flows on to impact the energy of the audience.

A five-piece band performs John Rodgers’ score, which draws on influences spanning jazz, opera and movie musicals, live on stage. The inclusion of the band into the setting adds to the close and jovial atmosphere of the dance club, and the bandstand transitions seamlessly between scenes. The band comprises Stephen Newcomb, Katie Randall, Michael Whitaker and Mika Atkinson, led by Music Director Wayne Freer, who was also the Musical Director of the original production. Sound design and sound system design by Derek Wilson adds to the atmosphere of the work, and handheld percussion and manual sound design adds humour and quirk. 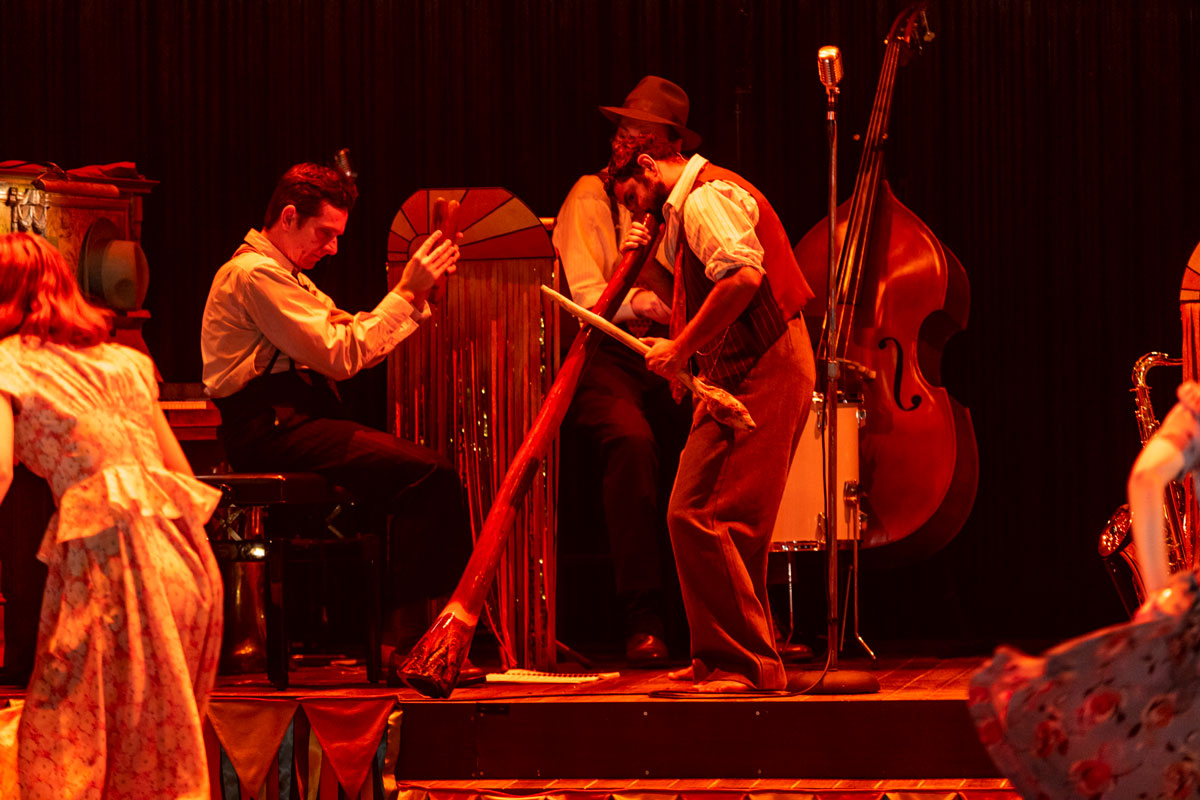 Costume design by Richard Roberts, who also worked on the original production, captures the essence of the 1940s with swinging skirts, suspenders, pinstripes and fedoras. Set and prop design by Jacob Nash creates the festive indoor settings of The Sunshine Club and Cloudland, down to the small details, as well as the otherworldly outdoor setting. A glittering, layered backdrop is raised and lowered to create a range of locations through framing, and props are moved smoothly between scenes by the cast and crew. Lighting design by Ben Hughes creates new spaces on the stage, as well as creating and emphasising mood for the action unfolding onstage.

Choreography by Yolande Brown uses effective shapes and formation changes in addition to the partnered swing dancing of the dance hall. Although the cast performs the choreography with solid synchronicity and technique, there was a moment in the eponymous musical number when Rose and Audrey dance with invisible partners in the second row, which was visually distracting.

Like any enduring musical, The Sunshine Club embodies the triumph of love and the power of hope, but also doesn’t shy away from the historical (and ongoing) realities of racial segregation, inequality and violence. Bursting with joy, feeling and a distinctly Queensland flavour, this swinging musical revival asks audiences to consider how far we have come, and where we can go from here, to shape a future where we can all dance in step with one another.

The legendary artist takes us on an engrossing ride through the less-travelled roads of Australia’s musical heritage and identity.

Review: Sisters Are Doing It For Themselves (The Little Red Company)

We can all feel uplifted and united by Little Red’s world premiere celebration of female empowerment and artistic connection.