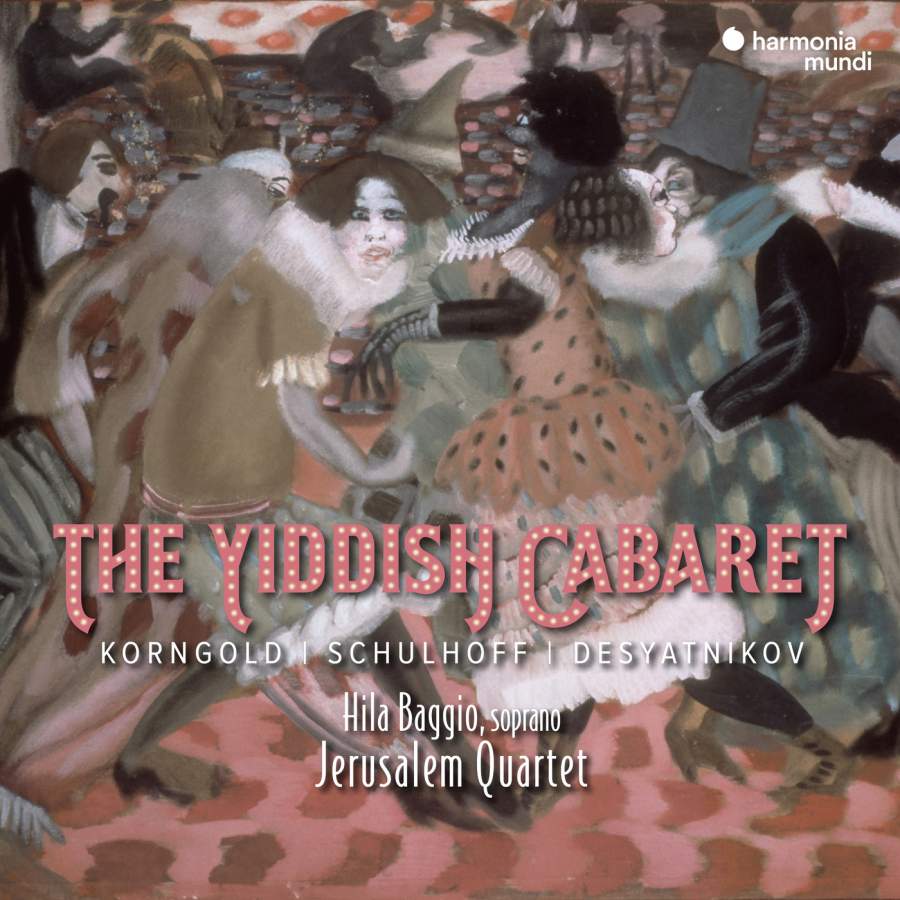 Let’s be honest, straight off: if you’ve come to The Yiddish Cabaret expecting a Yiddish cabaret, prepare to be disappointed. Only Leonid Desyatnikov’s Five Songs for Voice and String Quartet can claim any direct association (and that at several steps removed) with the Weimar era being hymned by the disc’s title.

If Korngold’s Second String Quartet and Schulhoff’s Five Pieces for String Quartet can claim only glancing connections with Yiddish culture (more than can be said for their cabaret credentials), what can’t be faulted is the Jerusalem Quartet’s committed, communicative playing.

Composed in 2018 and making their first appearance on disc, Desyatnikov describes his Five Songs as “free transcriptions” of Yiddish lyrics from pre-war Warsaw and Łódz´. They represent, he says, “the eclectic culture of the assimilantes, the lumpenproletariat and the outsiders, the culture of cheap chic, and at the same time – in its best forms – a brazen, talented culture full of self-irony and latent despair”.

There’s crisply delineated playing to be enjoyed, too, in Schulhoff’s Five Pieces for String Quartet. Clothed in the garb of a Baroque dance suite, filled out with allusions to popular dance forms of the early 1920s, there’s more than a touch of self-medicating about its agitated earnestness. Notwithstanding its tangential relationship with Yiddish cabaret, it receives committed advocacy here.

What Korngold’s Second String Quartet is doing here is anybody’s guess. Composed in 1933, a decade after the Schulhoff, it’s Korngold in temporary thrall to Arnold Schoenberg but reluctant to let go of Richard Strauss. The miscegenated music that results is treated to keenly lyrical playing (although the Doric String Quartet on Chandos has the edge in ardency) with the opening Allegro elegantly voiced, the Intermezzo delightfully jaunty and carefree, the atmospheric Larghetto darkly poetic and the Waltz Finale lithely fluid and buoyant.

The obvious disconnect between title and program aside, these are fine performances caught in well-framed sound and worth investigating.

Israeli quartet take on the Impressionists in a double bill.

When they were 14, the Jerusalem Quartet were considered The Monkees of the classical world because they were “manufactured” by the Jerusalem Music Centre. Since then, with one change of personnel (violist Ori Kam replacing Amihai Grosz in 2010), they have established themselves in the top echelon of chamber groups. They continue their wide and impressive discography with this awe-inspiring reading of three of Béla Bartók’s six quartets. Led by the charismatic Alexander Pavlovsky, the Jerusalems are a tight, exciting unit, brilliant in attack but also uncannily sensitive. Sergei Bresler’s violin sparks off Pavlovksy’s and Kam is the equal of his predecessor in every respect. Kyril Zlotnikov, playing one of Jacqueline du Pré’s instruments loaned to him by Daniel Barenboim, is a formidable cellist, driving and astute. Together they bring out every nuance of these awe-inspiring works, from the Fourth’s scurrying insect-like ‘night music’ of the prestissimo second movement to the heart-rending mesto finale of the Sixth, composed at a time when Bartók was down on his uppers and mourning his mother’s death. The Jerusalems brought the house down when they played the Allegretto Pizzicato as an encore when they were here in 2016 on their seventh Musica Viva tour….