Arriving at the gorgeously restored Glebe Town Hall  for a performance by the Castalia Vocal Consort, one could have been forgiven for thinking they’d stepped back in time and found themselves in a BBC costume drama. Were we to experience one of Dudley’s extravaganzas at Kenilworth Castle in 1575, or a soirée in a Jacobean home? The grand interiors and main hall of the Victorian Free Classical structure designed by Ambrose Thornley Jnr provided a setting that landed somewhere between the Elizabethan court and the private estates and homes, which once hosted the clandestine performances of Catholic composers Robert White and William Byrd. 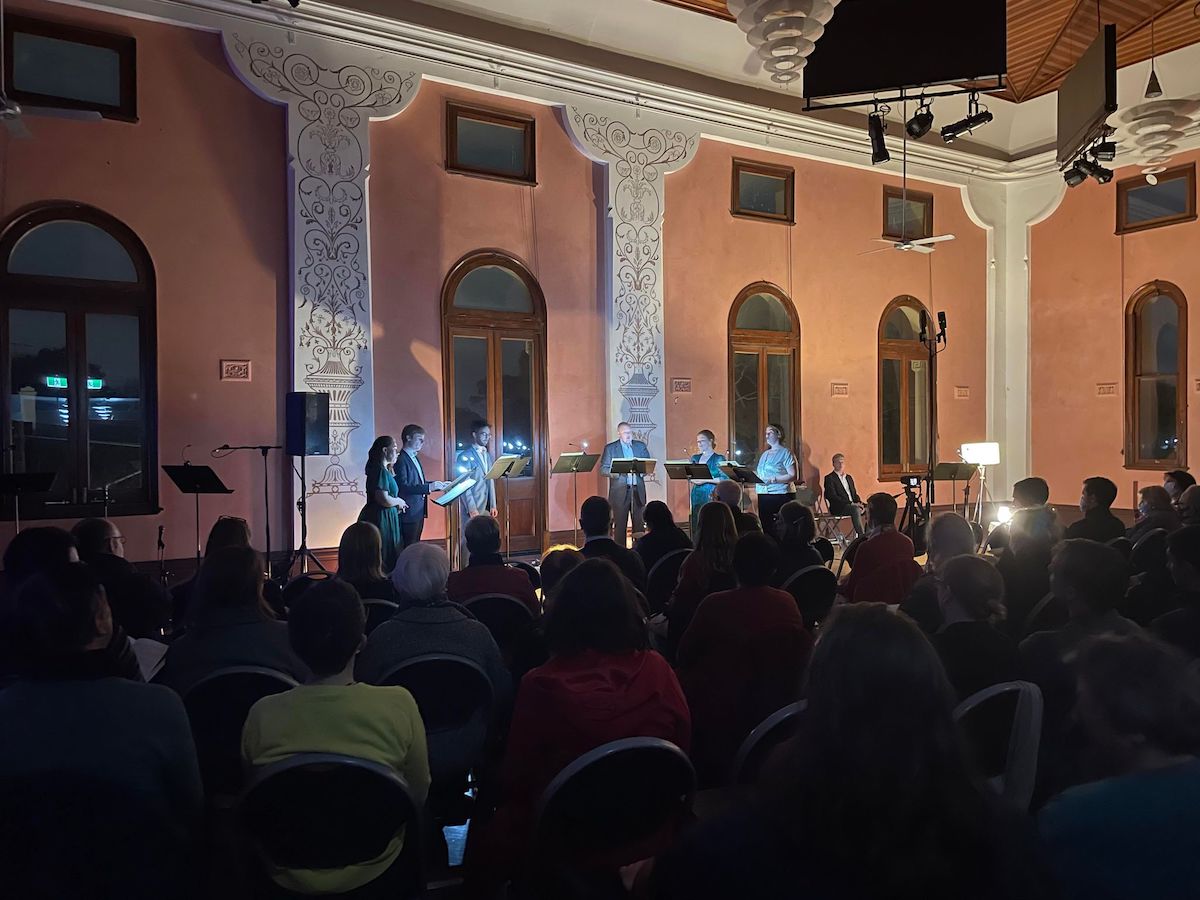 Under the artistic leadership of soprano Amy Moore and mezzo-soprano Stephanie Dillon, Castalia Vocal Consort can pride itself on keeping the Renaissance and Baroque consort repertoire alive in a modern context. Moore and Dillon are joined in their efforts by soprano Chloe Lankshear, tenors Christopher Watson and Louis Hurley, and basses Philip Murray and Tom Flint. All are virtuoso performers known for their work with local ensembles including Pinchgut Opera, The Song Company, Cantillation and Bach Akademie Australia. Abroad, the consort’s members have also performed with the Tallis Scholars, Tenebrae, EXAUDI Vocal Ensemble and Stile Antico in the UK, and Theatre of Voices in Denmark.

On Saturday evening, the singers demonstrated breathtaking mastery as they delivered a diverse program called Under Cover of Darkness: Songs of nocturnal landscapes and night-time wanderings, spanning over 500 years of vocal composition. The musical pieces were often bookended by selections from poets Emily Dickinson, Li Po, Ted Hughes, Carol-Ann Duffy and Galway Kinnell, which were read by the singers themselves. The overall effect was that of a journey from dusk till dawn during an endless night in the European summer. It perfectly evoked those early morning hours when the sky takes on a deep indigo hue and allows one to still discern impossibly deep shadows in the dark. In such moments, the subconscious is awoken and we can dwell on dreams, desires and fears that remain hidden in the light of day.

The program began with a setting of John Clare’s The Evening Primrose by Benjamin Britten. It was one of the Five Flower Songs written by Britten to mark the 25th wedding anniversary of Dorothy and Leonard Elmhirst, who were passionate botanists and founders of the Dartington Trust for ecology and the arts. This segued into John Wilbye’s 1598 madrigal, Draw on, Sweet Night, before the live performance premiere of Twilight on the Snow by Australian composer David Yardley. This diaphanous piece disguised its modern pedigree in the composer’s medieval/fantasy-inspired style, before leading into Robert White’s hymn for Night Prayer – Christe qui lux es et dies – from 1580.

The evening continued to jump backward and forwards in time, incorporating a work by 19th-century, Norwegian composer Eyvind Alnæs and two modern pieces by Finland’s Kaija Saariaho, which perfectly demonstrated her background in electronic and spectral music. Both of Saariaho’s works combined whispers and heavy breathing with vocal stylings reminiscent of white voice or ethnic Slavic Balkan singing. The first, Nuit, Adieux from 1991, featured the texts of Jacques Roubaud and Honoré de Balzac, while the earlier 1988 composition From the Grammar of Dreams served as a setting for selections from Sylvia Plath’s Ariel and The Bell Jar.

These pieces were placed alongside a selection of works that, although unique in their own right, remained united in their polyphony. Sweden’s Karin Rehnqvist first treated us to the ancient Kulning herding call in Night on our Earth and When the Night Brings Peace, before Denmark’s Pelle Gundmudsen-Holmgreen immersed us in an otherworldly symphony of high-pitched bat calls and clicks with his Bat’s Ultrasound from 2001. Separating them was the 16th-century German early-Baroque composer Heinrich Schütz, whose compositions for the Lutheran church were among the last written in modal style and are rich in non-functional harmony.

The performance ended as dawn broke, first with Howard Skempton’s 2004 setting of Henry W. Longfellow’s Four by the Clock and then Elizabeth Maconchy’s 1978 setting of Eleanor Farjeon’s The Night Will Never Stay, before William Byrd’s 1589 Vigilate rounded out the proceedings. This beautiful work is a wonderful example of the composer’s skill at word painting and layering, whereby the voices tripped over each other as they sang,“repente” – originally intended as an urgent call to restore Catholicism in England, but here more a reminder to be alert for surprises that await us at every turn.

Drawing ties to works by contemporary composers should make music rarely performed in this country more accessible. It is a bold ambition that Castalia Vocal Consort seeks to fulfil with gusto. Unfortunately, it is made all the more challenging by a music-education crisis that has barely improved since the Australian Government’s national review in 2005. Many primary school children still receive no music training at all. What programs do exist often depend on philanthropy, especially in marginalised areas. Such systemic failing has resulted in a rapidly reduced market and music like this is becoming increasingly esoteric. Judging by the make-up of the audience on Saturday night, appreciation of these works is still reserved for connoisseurs, as has traditionally been the case with consorts over the centuries. Under Cover of Darkness was a rare and priceless jewel to be treasured. Castalia Vocal Consort can no doubt rely on its loyal following, and we must hope it grows.