The second novel or the follow-up to a hit show are traditionally the trap where dreams go to die. Expectations are high and hard to manage and so often, what was effervescently successful first time around fails to find fresh fizz. And then we have Genevieve Hegney and Catherine Moore. In 2018 they were Unqualified, and the show was a raging success. Now, after the world has been turned upside down for more than two years, they are Still Unqualified. And we are so much the better for it. 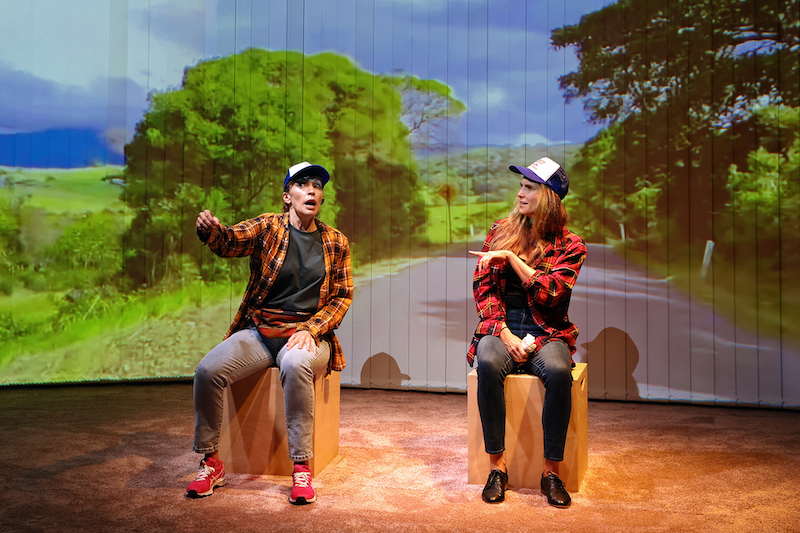 Hegney and Moore are funny, clever and talented women. They can write, they can act, and they can sing – really well. Put them together, as writers and performers, and the result is not only effervescent – and brilliantly silly – but also touching and insightful. They are the real deal in authentically conjuring up women’s lives and experiences, and an even realer deal in finding the laugh-out-loud humour in those lives, no matter how bitter are the pills that may have to be swallowed along the way.

Hegney is the possibly terminal furious and frustrated Joanne, dumped by her TV star hubby who’s run off with a pneumatic Russian doxy and left her with a pile of debt. Her general demeanour isn’t helped by her friend and business partner Felicity (Moore), whose blinding optimism and merry outlook on life is not only in stark contrast and very irritating, but also has little bearing on the facts.

Their employment agency – still staggering on post-Unqualified despite not landing any Gerry Harvey-style government money – offers solutions to any business seeking temps to take on any job. And they are of course able to fulfil this impossibly wide brief by doing the jobs themselves. So we see them as doulas horrified by the facts of birth, as museum guides giving kids the lowdown on Van Gogh and Vermeer, and as clairvoyants whose ouija board is better at it than they are. They also plunge into the wellness industry and have a go at being courtroom lawyers, for which they’re clearly qualified given the number of TV law shows they’ve ingested.

Meanwhile their backstories are slyly interwoven and these add a meatier level than might be expected to the froth and bubble. Director Janine Watson deals with the cracking pace demanded by initially short and sweet – and sour – scenes and changes. At the same time, she keeps a firm hand on the humanity of the characters. It means Felicity and Joanne are reassuringly grounded and don’t fall into caricature, even at the most absurd moments.

The 90-minute play takes place on a nicely carpeted space on which a number of IKEA-ish cubes are shunted around as required by the temp job of the day (set and costume design Hugh O’Connor, lighting Kelsey Lee). The vertical blind-hung back wall periodically becomes a screen on which are projected anything from lighting effects to old masters, to the landscape of cross-continental truck driving (video design Morgan Moroney). And be warned, the outcome of the delivery of pet beds to Perth should make naive girls think twice about becoming truckies.

The occasional breakout into supplementary characters – the contemporary artist who earnestly explains her seminal work The Umbilical Cord is Wrapped Around My Neck, for instance, or a pair of moustachioed queens whose wildly-at-odds wedding wishes signal a divorce in the near future – hints that Hegney and Moore’s original plan of a TV sitcom must surely still be on the cards. It is sharply funny, has a lot to say about virtually anything and is a glorious antidote to our current existential malaise. Recommended.

Peter Evans’ stylish but faceless production has a saving grace in two of its principals.