Prolific composers often suffer neglect, even when the quality of the music is consistently high. Perhaps sheer volume leaves the listener bedazzled and unsure where to start. Telemann and Martinů are obvious examples, but Danish composer Vagn Holmboe (1909-1996) is another case in point. Over a 75-year career he produced almost 400 works including 13 symphonies (all well worth exploring on BIS) and many works that fall into odd categories such as chamber symphonies, chamber concertos and sinfonias. 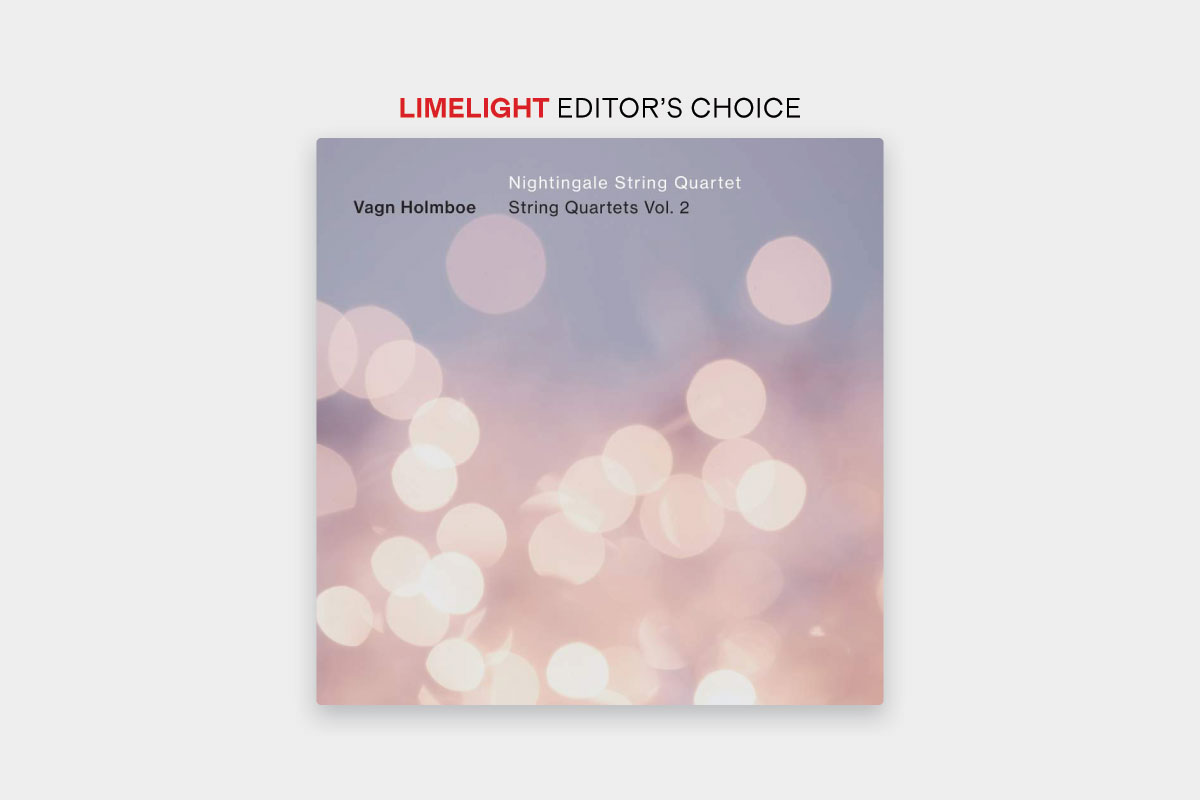 At the heart of his oeuvre are the 30 plus string quartets, often gnarly, frequently quirky, but always involving (Holmboe was a gifted violinist, so he knew what he was doing). Back in the 1990s, the Kontra Quartet produced an excellent survey for the Dacapo label, and that same label now delivers the second volume of a second cycle with the Nightingale String Quartet. The latter did sterling work a few years back on a three-disc survey of the string quartets of maverick composer Rued Langgaard.

There’s a strong sense of stylistic progression in Holmboe’s quartet writing over the years, and unlike the Kontra series who tended to couple works from the same period, the Nightingales opt to place early, middle-period and late works side by side, giving you the chance to follow the composer’s development within each volume. Here we have String Quartet No 2 (Holmboe’s Op. 47, from 1949), String Quartet No 14 (his Op. 125 from 1975) and No 21, dubbed “Quartetto Sereno” (Op. 197 from 1996, the year the composer died).

No. 2 was written in 1949 when Holmboe was already 40. That he waited until he was fairly mature before committing to the string quartet is a sign of how seriously he took the genre. In fact, he had written ten string quartets by 1944, all of which he jettisoned. Bartók was clearly a role model – Holmboe’s First Quartet carries an ‘In Memorium’ dedication to the Hungarian composer – and there are certainly echoes here. Written (like Bartók’s Fourth and Fifth) in five movements, it opens with a gorgeous lyrical flight of fancy over sneaky, bouncing pizzicati – a real sense of a journey in the offing. The second and fourth movements are slow and searching. Like Bartók, Holmboe clearly had a penchant for night music. The cheeky Presto third movement is full of virtuosity and weaving glissandi, while the finale is a stamping dance laced with harmonic sidesteps.

Though both quartets are technically outstanding, generally, in No 2 the Nightingales take fast movements a fair bit quicker than the Kontras, something that pays dividends here where there’s a real sense of swing to the playing. Not only that, they are better recorded, the tone warm and the acoustic natural, compared to the Kontras’ slightly echoey and recessed sound.

The six-movement No 14 is done and dusted in 15 minutes, indictive of the composer’s tendency to brevity as the years went by. Until the Allegro vivace finale, much is inward-looking and understated with the first two movements played with mutes. Nevertheless, there is a world of musical interest here. This time the Nightingales are generally slower than their rivals, a choice that brings out more of the detail in a work that repays repeated listening. Closer miking also helps.

The Quartetto Sereno was edited by Per Nørgård after Holmboe’s death. It’s two brief movements – slow, fast (but with a tranquil postlude) – form a perfect counterweight with no sign of a slackening of invention. Again, the playing is remarkable, both technically immaculate and emotionally assured.

If you don’t know him, Holmboe is a great composer, and this is a series that should appeal to all lovers of the 20th-century string quartet. Furthermore, I can’t imagine these masterful interpretations being bettered.