While it’s always difficult to pinpoint a singular highlight in any given year’s artistic calendar – particularly when that year is barely halfway through – I would put forth WASO’s performance with the Russian-born conductor Vasily Petrenko and Australian violin soloist Emily Sun as a serious contender. Petrenko and Sun made a compelling duo as programming draws. Petrenko’s vast international profile boasts prominent roles with the Royal Philharmonic Orchestra and the State Academic Symphony Orchestra of Russia alongside his 15 year-tenure with the Royal Liverpool Philharmonic, while Sun’s many international competition prizes and 2018 ABC Young Performer of the Year award mark her as an impressive national draw that has seen her perform with many major Australian and international orchestras. 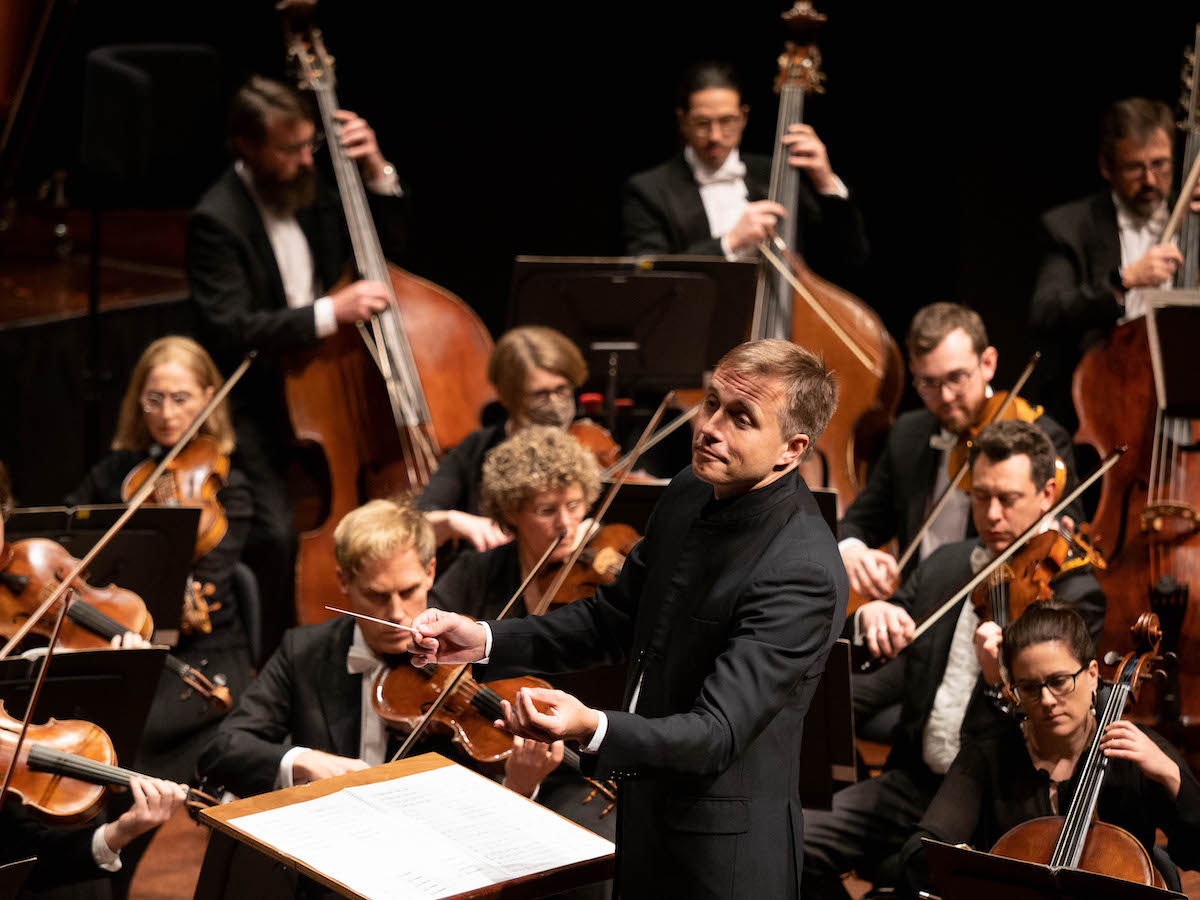 Though the programming for the evening was, at face value, uninspired – three men, all European, all dead – the works themselves cast an impressive ‘light and shade’ effect on the evening, with Carl Nielsen’s bustling Maskarade Overture and Mozart’s buoyant Violin Concerto No 4 in D Major bringing levity and spirit to an evening dominated by Shostakovich’s Symphony No 11, subtitled ‘The Year 1905’. The subtitle refers to the shooting of thousands of unarmed workers at the Winter Palace in St Petersburg on 9 January, 1905; these civilians had come to present a petition to Tsar Nicholas II regarding worker’s rights, and the ensuing massacre is considered one of the significant stepping stones towards the eventual 1917 Bolshevik Revolution. Shostakovich was born one year later, and the event would have a profound influence on his upbringing; his father had been in attendance and survived.

But first, something light! Nielsen’s 1906 opera Maskarade is widely considered to be Denmark’s ‘national opera’, with the original Holberg play providing plenty of comic material in a masked ball setting. Mistaken identities, class tensions and displaced lovers abound in the Figaro-esque work, and the overture does much of the heavy lifting in capturing the fast-paced, Mozartean energy of the work. Here, Petrenko and WASO did an excellent job at bringing this energy to life; a homogenous and clean opening statement soon gained its edges, with high violin figurations and crisp flute offbeats giving the score the zest it required. Whooping figures in the flutes and horns tilted the overture closer to R. Strauss than Mozart, and the gentle second theme led to some frighteningly exact intonation and secure phrasing in a delicate pianissimo oboe-bassoon octave pairing. A jolly brass fanfare and some crisp timpani action brought the overture to a close, clocking in at well under five minutes. A tight little gem of a work, expertly brought to life.

Of all five of Mozart’s violin concertos, his Concerto No 4 in D Major has perhaps the most iconic opening of all of them, an emphatic dotted figure that, once emitted by the soloist, never returns. Petrenko led a reduced WASO through a warm, balanced opening in which the rapid decay and separation of repeated notes led to an air of refined clarity. The horns and oboes in this opening had a particularly ‘early’ sonic quality, which complemented the rest of the ensemble nicely, and the strings were agile and responsive under Petrenko’s lively leadership. Emily Sun’s crisp, silvery violin opening did wonders to launch her into the precise and rapid passagework of the subsequent section. At times Sun’s tone lost nuance in the very top of the register, but her trills and ornaments were tight and controlled and the flashes of operatic drama allowed her to lean into the slightly darker moments of the material. The large string tuttis in this movement at times overpowered the oboes and horns, but the winds were agile and alert throughout, particularly controlled and resonant in the final chords of the Allegro. A warm vibrato and evocative phrasing in the Andante cantabile allowed Sun to sing through her lines, culminating in a yearnful cadenza that had the audience noticeably captivated. A handful of stunning oboe solos made this movement a standout. Petrenko, WASO and Sun absolutely relished the handovers between the final movement’s graceful, andante grazioso sections and the cheekier, borderline barnyard allegro ma non troppo. Here, Sun showed off some show-stopping technique with thrilling yet precise passagework and a masterfully handled double-stop cadenza bonanza towards the end. A slightly rhythmic mismatch between winds and strings in the closing quick cascading figures did little to dampen the triumph of the movement. 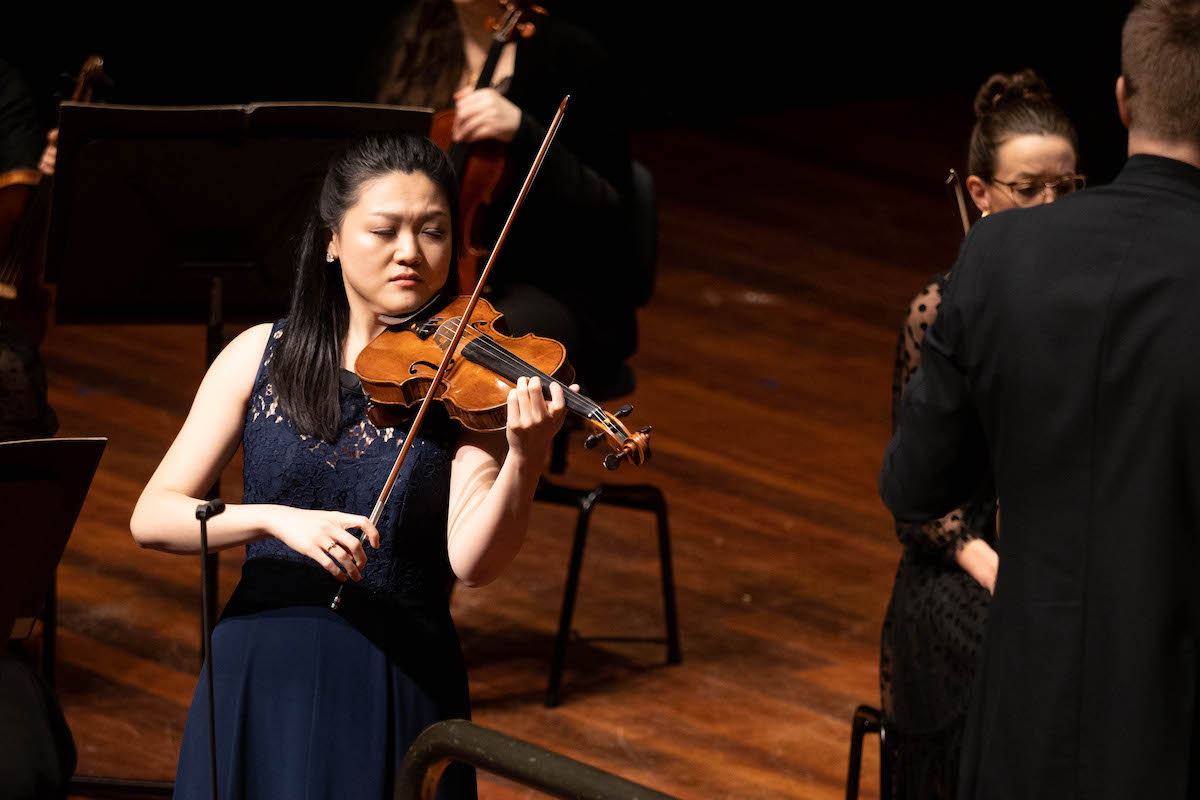 I don’t like to spend my superlatives at this point in the year, but here goes: WASO and Petrenko were blisteringly phenomenal in Shostakovich’s grandiose Symphony No 11. The opening Adagio movement (Palace Square) opened to eerie, well-balanced open string chords and a delicately rumbling timpani,  evoking the modal inflections of the Russian Orthodox Church and the square of St Petersburg’s Winter Palace. A recurring trumpet solo was executed brilliantly every time by Principal Trumpet Brent Grapes, starting soft and far-off before coming to the fore, piercing and brilliant. Warm, rustic folk tunes in the flute section were well-matched in dynamic and tone, and the handover of the tune to the trumpets, who turned it into something menacingly and spiteful, was particularly well handled. Petrenko masterfully wrought out the colours of Shostakovich’s score with the many instruments at his disposal; in particular, the shrieking high winds over the cellos wailing at the top of their register was excellent.

A blended, balanced low brass chorale led into the quick second movement, with a mournful clarinet/bassoon melody sighing over properly restless strings. The brass and percussion were particularly effective in the hyperactivity of this movement, blazing and thumping away at the score, a brilliance that made the handover to a melancholy violin and viola melody all the more poignant.  Throughout this movement (Ninth of January), Petrenko was an expressive and dynamic force on the podium, his intent and spirit easy to read even from the back of the hall.

The third movement (Eternal Memory)  was stolen by the violas, whose delicately phrased, bittersweet melody was elevated by some round, steady celli pizzicato and chillingly droopy phrases in the clarinets and bassoons. An abrupt interruption of the third movement by the fourth – The Tocsin or, colloquially, ‘The Alarm’ – sent the orchestra into a controlled tizzy, with Petrenko moulding the high, toylike winds, galloping strings and bulging brass into Shostakovich’s warning for Russia’s future conflicts. A smooth, controlled cor anglais solo towards the end led to a bombastic finish of turmoil and turbulence that launched many audience members to their feet in a standing ovation. Such an electric performance by one of the country’s finest ensembles and one of the world’s most revered conductors deserved nothing less.