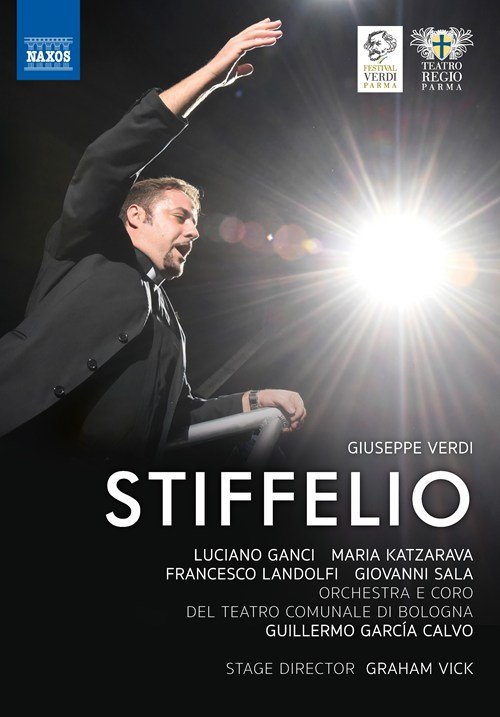 British director Graham Vick has been challenging opera aficionados with his thought-provoking productions for four decades now, and to judge by recent reviews from Birmingham, where he currently holds the reins as Artistic Director, he’s still going strong. This typically no-holds-barred staging of Stiffelio from Parma’s Festival Verdi, a co-production with Teatro Comunale di Bologna, won awards and set tongues wagging in 2017 and comes up surprisingly well on DVD despite the enormous challenges of preserving an immersive promenade production for the small screen.

Stiffelio fell foul of the censors in Verdi’s time for its portrayal of a Protestant minister confronting adultery with forgiveness when he discovers it under his own roof, and Vick’s contemporary interpretation must have raised a few hackles in modern-day Italy. Here, the minister presides over an evangelical church that embraces the sacredness of the traditional family yet is clearly a hotbed of violent prejudice and ‘transgressive’ relationships that break out in moments of dramatic tension with acolytes and priests suiciding or writhing on the floor in forbidden couplings. At Stiffelio’s book signing, pro-choice protesters storm the stage and expose themselves before being dragged away.

With the audience entering during the overture and the action set on moving platforms, it’s a devil to capture on camera, but the team here do as well as can be expected. Similarly, the sound is pretty impressive, for though the principals must be miked, the chorus are often scattered amongst the occasionally bemused ‘groundlings.’ Occasionally there is a feeling of one idea too many – does Siffelio’s wife Lina need to self-harm? – but generally this is a visceral and affecting staging that feels both original and relevant and packs a genuine punch.

Through it all, Stiffelio, which Verdi considered one of his better failures, comes across as first rate, second-rate fare – Act II, in fact, is top-drawer Verdi. Don’t be dissuaded by the gay-bashing or raunchy lovemaking (and for opera-sex – always tricky – this is pretty darn convincing). Vick has definitely done Verdi proud.