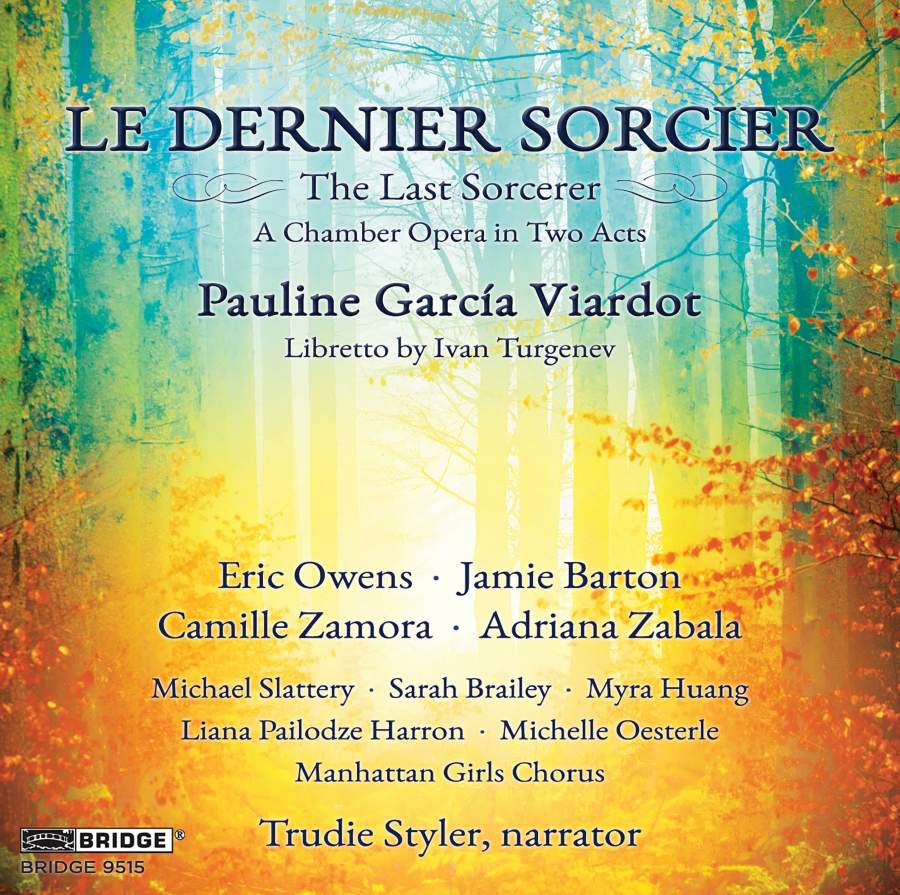 This premiere recording of Pauline Viardot’s 1867 Le Dernier Sorcier (The Last Sorcerer) is a delight. With a libretto by Ivan Turgenev, it tells the story of a sorcerer, Krakamiche, whose forest home comes at the expense of its rightful inhabitants, the fairies. Now with diminished powers, he is unable to fend them off any longer. A classic story of redemption, he learns the importance of peaceful co-existence and rediscovers his humanity through the efforts of his daughter Stella, her lover and prince, Lelio, and the fairies and their queen.

Scored for piano, it’s an enchanting work with a lightness of touch that avoids the frothy. Viardot’s musical refinement is evident throughout, and with Turgenev’s skills as a librettist, the dramatic pacing is just right, culminating in a satisfying conclusion. Viardot’s vocal writing for each character is also well distinguished, and she gives the treble chorus plenty to play with.

As Krakamiche, bass-baritone Eric Owens offers a fine portrait of an embittered man realising the error of his ways, bringing his usual subtle gift for comedy. Jamie Barton provides plenty of fruity, gorgeous tone as the fairy queen, relishing the soaring melodies, while Sarah Brailey’s Stella, though wiry up top, is a sympathetic presence. Her Lelio, Adriana Zabala, is a steadier vocal presence. Pianists Myra Huang and Liana Pailodze Harron are vivid communicators, whilst Trudie Styler is a warm narrator.

David Robertson and a fine cast deliver a detailed reading of Gershwin's masterpiece that should silence naysayers.

Review: All Who Wander (Jamie Barton)

Barton proves her worth in moody song fest debut.